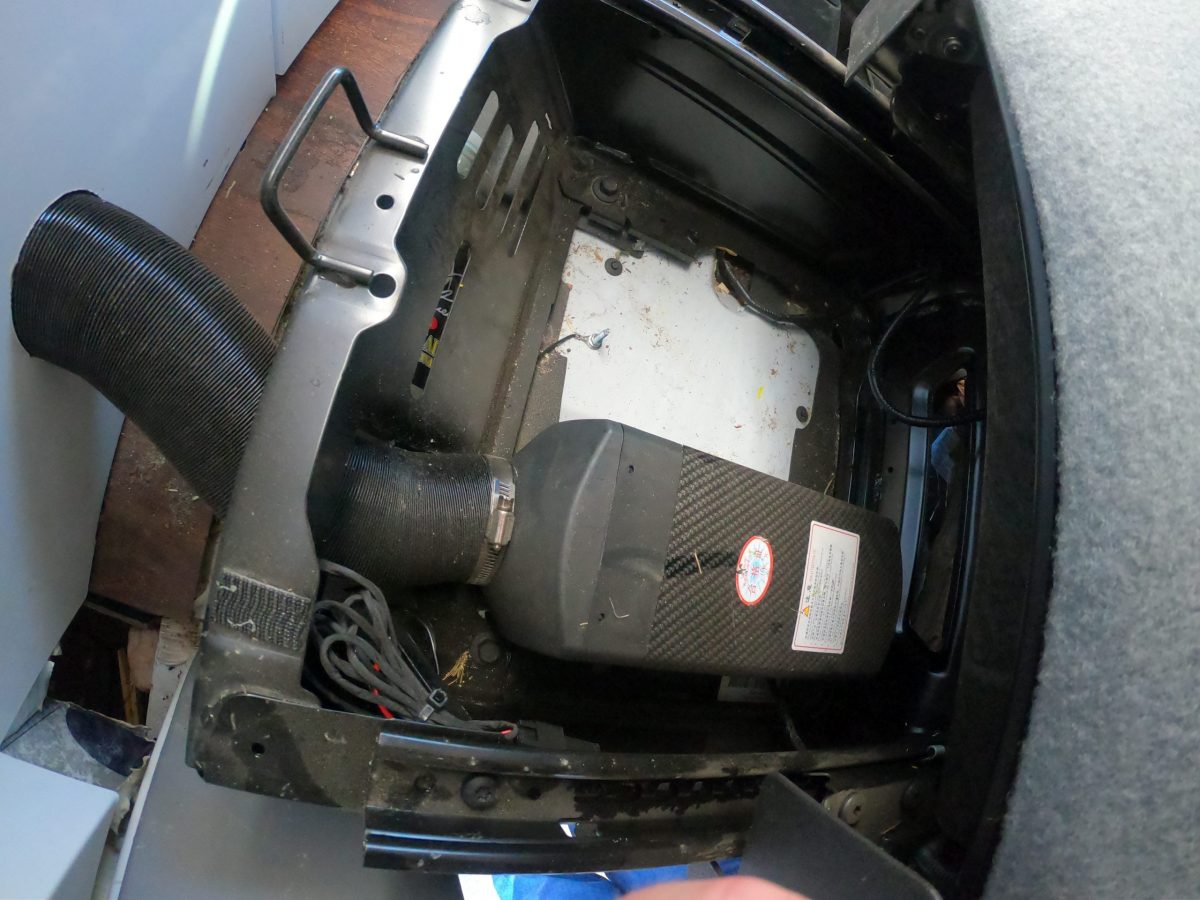 Like everything else, I did a deep dive on heaters during my initial build. I ended up installing a Propex HS-2000 6500BTU furnace, but later switched to a generic diesel heater that I purchased on Amazon. I didn’t find that the Propex was sufficient in the lower 20’s or colder in my van. Additionally, the cost of diesel means that I’m getting three times the heat output for less than half of the cost of propane. I sold my Propane furnace to pay for my entire diesel heater installation.

Note: You’ll see these marketed from 2kw to 8kw, there are only truly 2 models. 2kW and 5kW. The 2kW is harder to find and has less support, so I opted for the 5 and recommend it for all but the smallest rigs.

I chose to install the heater inside of the passenger seat pedestal. In Transits equipped with dual batteries, you may not have this option. My Transit had the bottle jack mounted here. The easiest option is to install the heater elsewhere in the van with a flat surface, but I appreciated the chance to utilize an otherwise useless area. You can utilize one of the bottle jack mount studs to orient yourself below the van before making your cuts, and the other can be repurposed as a ground for the heater.

There are two spots to install this under the passenger seat: either closer to the passenger door or closer to the driver’s. I have seen one person mount their heater on the driver’s side of the passenger seat platform, but a stock van is going to require removal of the exhaust heat shield– and in my van, my floor is already heated up from that and I wouldn’t trust anything to be near it unprotected. Their van is significantly modified and had the heat shield removed.

Cutting holes and modifying the pedestal

Installing on the passenger side leaves a small margin for error in a deep channel that is not easy to access. In some install photos, you’ll see a series of small, neat holes drilled for everything to pass through and bolt up from underneath. Not going to happen here, your most conservative option is two large holes as I’ve done below. Note: I had to make two new holes in the mounting plate because of where my holes are cut. I’d just cut out a square/rectangle rather than what I’ve done here. Alternatively, these holes should have been a little more toward the driver’s side (1/4-1/2″) to avoid having the lip of the mounting plate need to go underneath the pax side of the pedestal. 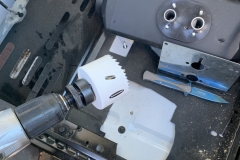 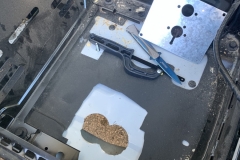 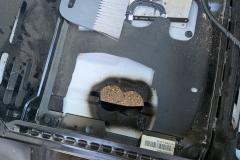 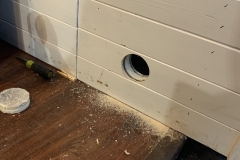 There is a recessed groove right down the middle of where I did the install. I built up the channel in the sheet metal with high-temp RTV and let it set. I then used a ton of it under the mounting plate to ensure an air-tight seal. This is pretty important to prevent fume intrusion. I attached the silicone gasket, mounting plate, fuel line, combustion hoses, etc. to the heater before lowering it into place for the final attachment with 4 self-tapping screws. Any service requiring the removal of the lines attached to the bottom of the heater will require breaking the seal and removing the full unit. I am not super concerned by this as it’s not likely I’ll need to do this.

For the cabin hot air ducting, I cut one side of the slotted metal areas, and then bent them back out of the way. Not pretty, but got the job done. This was definitely cutting corners as far as a doing a professional install, but I was laying on a street in the Los Angeles area and just wanted it to be done with. I broke 5 metal cutting jigsaw blades in the process. This one have been done more easily (and cleaner) with the pedestal removed from the van. Update: I removed my seat to install a swivel and acquired an angle grinder. Don’t even both with the jigsaw, angle grinder made quick work out of cleaning the pedestal metal up.

For my hot air duct, I had to cut a hole in my steel partition wall. If you have to make such a hole in a dividing wall, I’d recommend ordering an 80mm hole saw. I used a 3.25″ (as it was available off-the-shelf locally), but the hole is almost too big for screws to bite into the area around it. 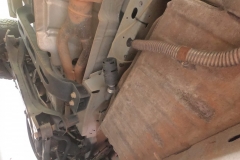 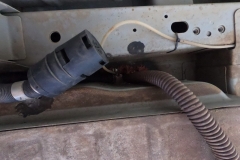 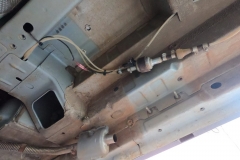 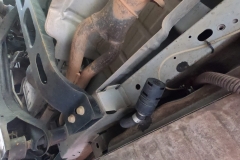 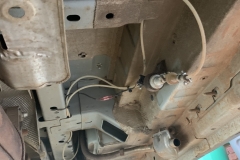 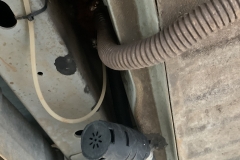 With the heater in place, I sealed around the edges of my cut-out with 3M smokeproof putty and high-temp RTV just as a failsafe for the RTV used above. I secured the intake hose and and the exhaust with included clips and self-tappers, then mounted the muffler. I put black or red RTV over each of the self-tappers to keep them from getting dirty/rusty. Worked great on removal of my old heater.

The fuel pump needs to be mounted at an angle of ~30-45 degrees. Your muffler should be as close to the perimeter of your van as possible and there should be no low points the line should never run “up” after its come down from the heater, to prevent water/condensation buildup. I considered adding another section of exhaust pipe as this exhausts directly under my sliding door, but the longer the exhaust — the more likely you’ll get carbon buildup in your heater. 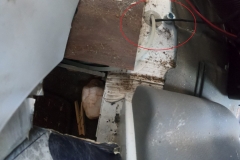 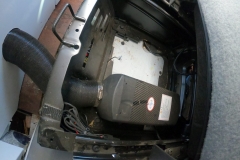 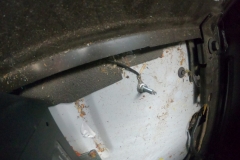 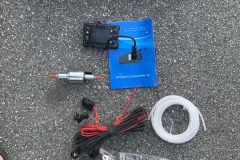 The wiring harness included was mostly sufficient for my purposes, but I did have to cut the connector off of the fuel pump section so that I could pass it through an existing hole in the Transit floor (circled in red in a photo above). This hole exits into a chassis member with an opening large enough to put your whole hand in.

This heater is typically going to be using between 2 and 3 amps, but during startup and shutdown, it will draw approximately 10 for 2-3 minutes! I’ve put the heater onto a 15-amp fuse, as I doubt the included wires could handle much more than that.

I cut and extended the thermostat wires, which were significantly shorter than you’d image. I had no issues adding another 3-5 feet to this section. The short ground coming from the unit, I crimped on a ring terminal and reused a nut from the bottle jack mount to attach it next to the heater, as pictured above.

Turret mount for other install locations

If you’re installing somewhere else in the van (like on top of a finished floor), you’re going to need to protect the surrounding combustibles from the extremely hot combustion exhaust. The only way to do this safely is with a turret. You can find these on EBay by searching for “diesel heater turret”, you’ll likely be ordering it from the UK.

You should totally budget $100 to purchase the Afterburner thermostat from Ray Jones. This unit adds WiFi control, Fahrenheit units, voltage cutoffs, fuel usage tracking, Android app, and so much more. I wouldn’t trust the heater half as much without it, though the factory thermostat did work fine.

I installed my fuel tank inside of my bench seat, as the dimensions just happened to work out perfectly. A note: it’s really easy to screw up the fitting on the bottom and wind up with a leak. I recommend tapping the *top* of your fuel tank and attaching your fuel line to a stand pipe.

I have never had any issue with the tank being inside and have never smelled diesel aside from opening the tank to fill it. Diesel is not wildly combustible in the way that gasoline is – you can literally hold a lit match to spilled diesel and it won’t ignite.

My initial plan was to run the fuel line to the rear of the van, but doing this proved very frustrating — and I gave up once I reached the rear axle. Avoiding the exhaust and suspension just seemed like more of a risk than having the tank at my slider. A bonus: all my fuel line and components are within arms reach for easy diagnosis and inspection now.

There is a gentleman on YouTube who does a 12-part series on everything you could want to know about these heaters, how they function, and how to maintain them. Understanding how they work will make the installation seem like less of a mystery. Link

One of the most useful install videos that I found: