When it comes to deploying the client to domain-joined devices, you’ve got a few choices. Software Updates, Client Push, or custom script. Deploying via software updates is definitely my preference, as any machine joined to the domain will get the SCCM client package pushed via the WSUS server the client device is pointed to via GPO.

Assuming we already have a healthy SCCM environment with a Software Update Point role somewhere, it’s a straightforward process. For proper usage of this client-deployment strategy, you’ll also want to verify that you have extended your AD schema, published your site to your AD forest (from SCCM console), and created at least a single boundary and boundary group configured to be used for site assignment. Else, your clients will not find a source from AD for the package nor a site code/MP to be assigned to during install.

You need to publish the client package to WSUS through the console. It generally will take a few minutes before both version boxes populate. 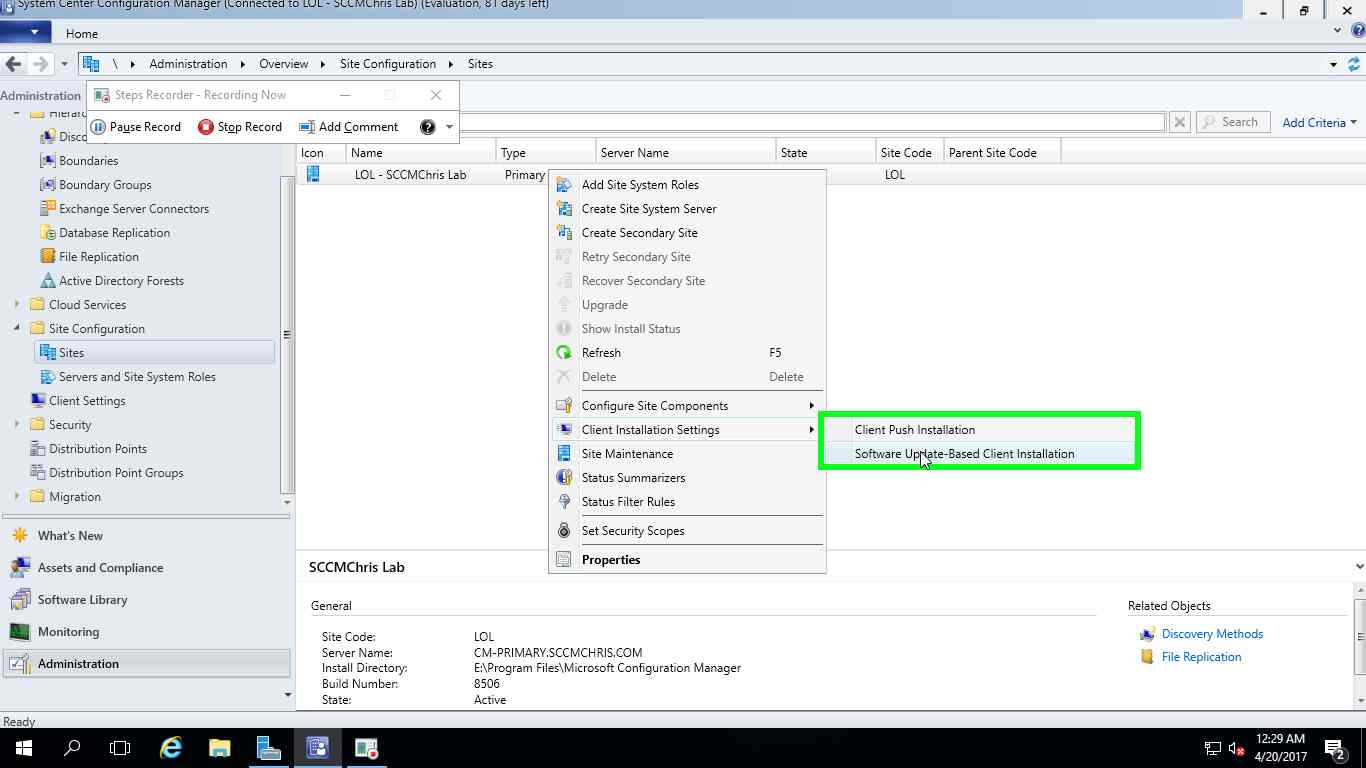 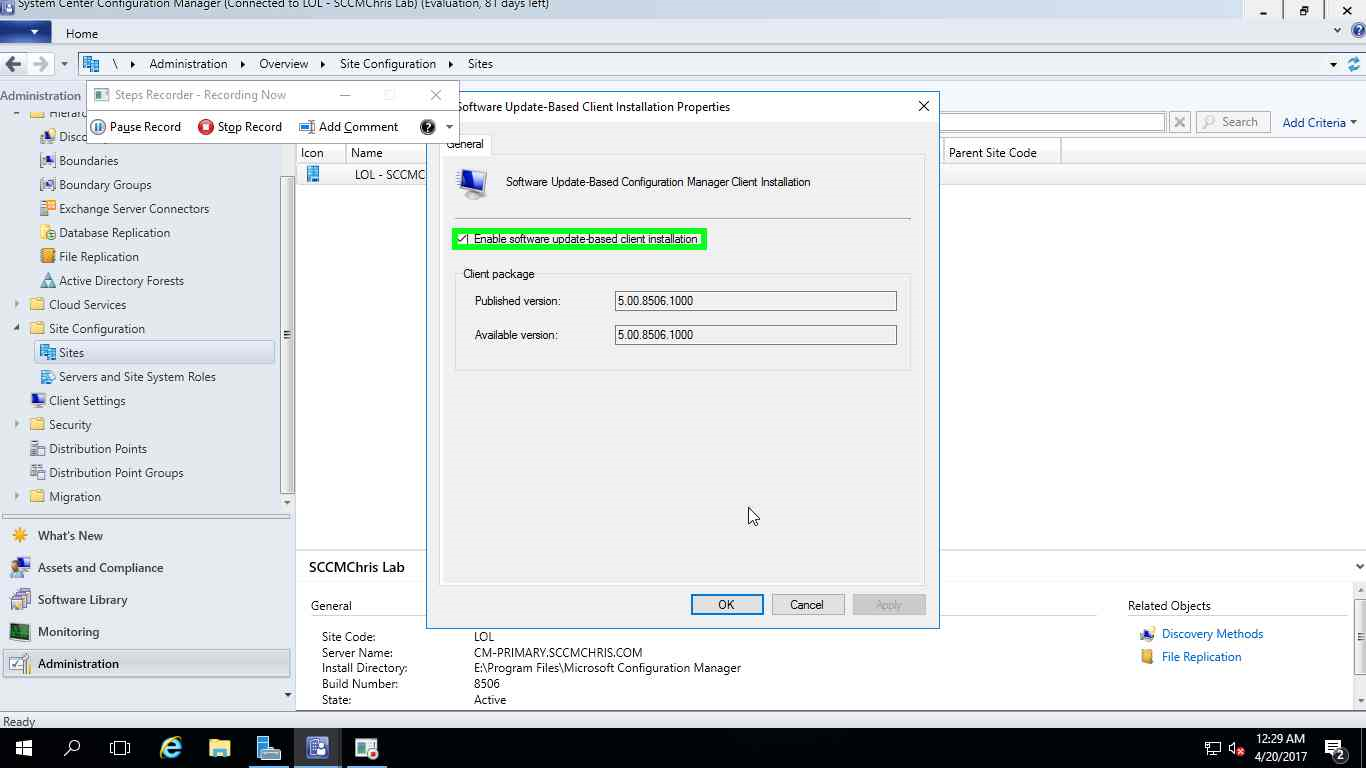 Next, you’ll need to configure a GPO to point targeted machines to WSUS. Be sure to include the port designation in the path, else you’ll likely see errors in the Windows Update checking process once the client processes the new GPO. Ask me how I know. 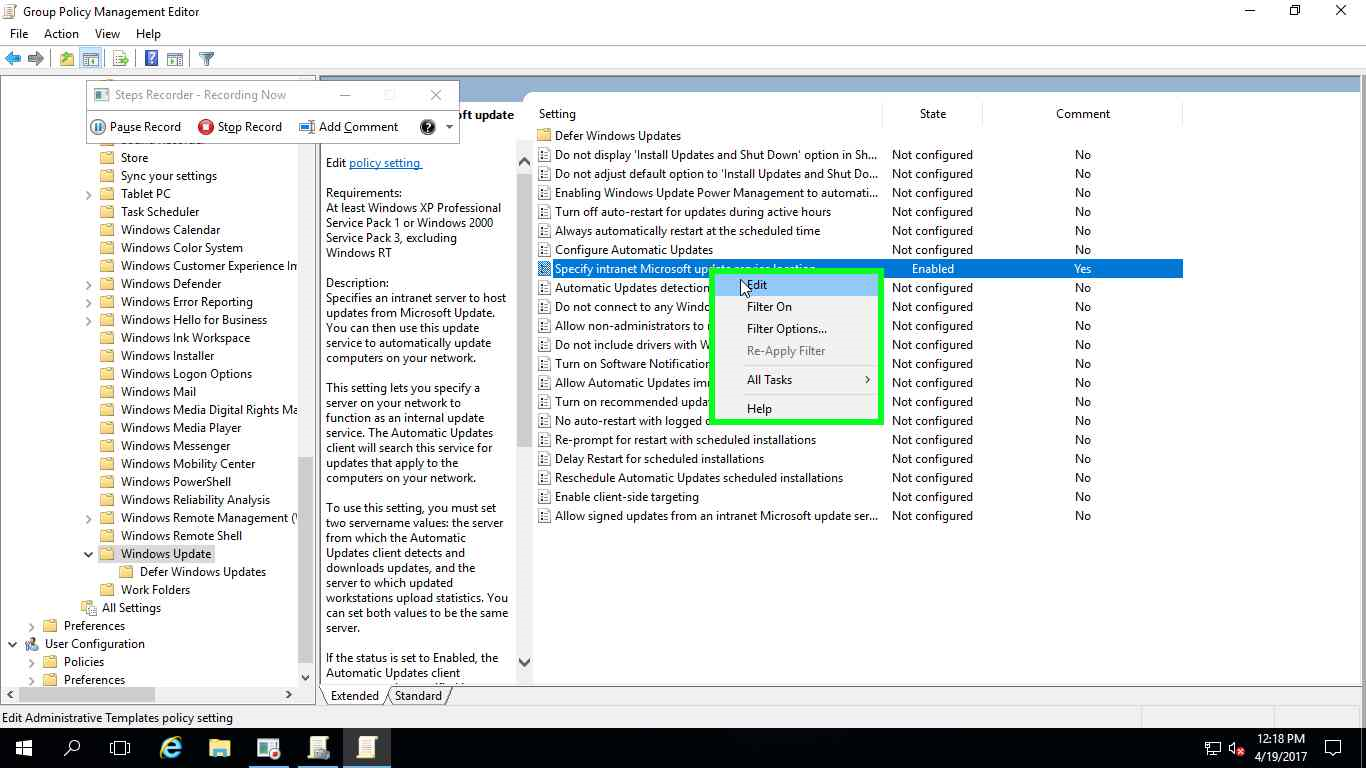 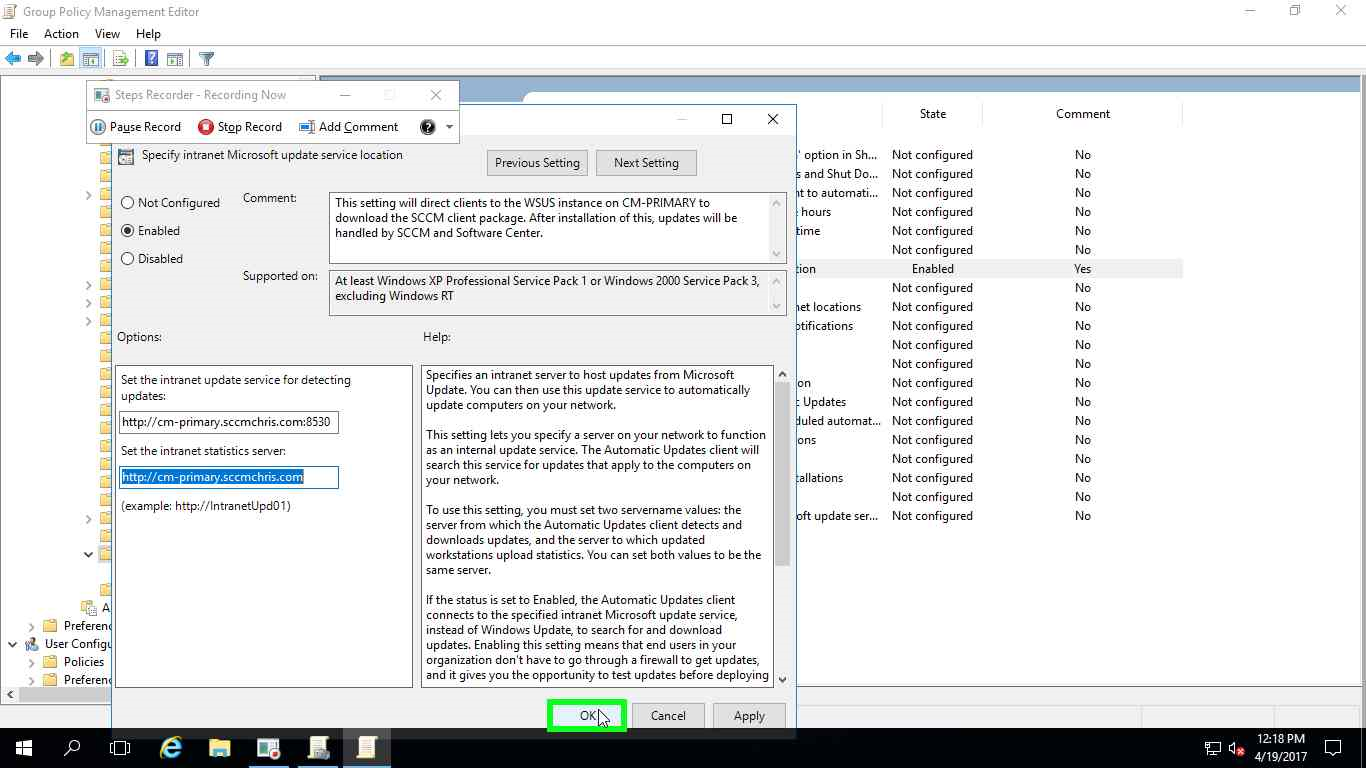 You can hop on a targeted system, run “gpupdate”, and verify that this policy applies with gpresult. Opening Windows Update and clicking “Check For Updates” should show that updates are “being managed by your administrator”, and if all goes well- you should have one update available, that update being the SCCM client package. 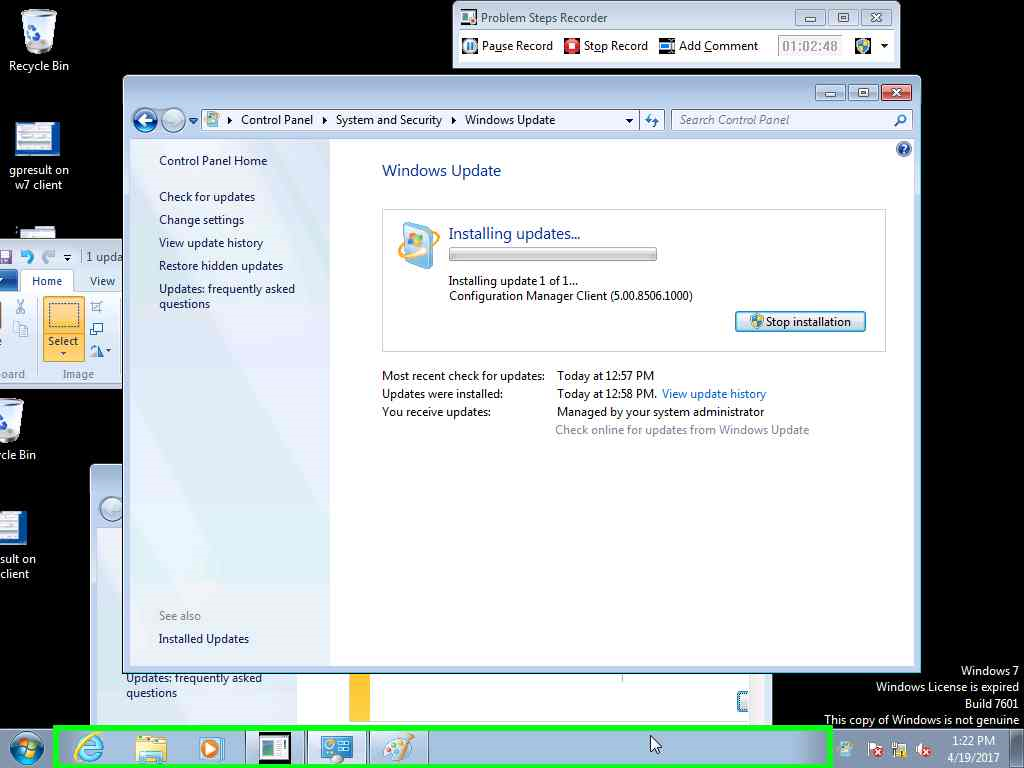 Once these steps are completed, you’ll have live and active clients to manage, and they’ll receive their Windows Update items through Software Center alongside your other SCCM deployments.

I’ve heard some confusion, especially from people who are just starting to implement Configuration Manager in their environment, over the SUP role and how it looks in practice.

Obviously, you’re under no obligation to use the WSUS integration or Software Updates functionality in SCCM. You can continue to use your standalone WSUS, but in the eyes of a user, I’d much rather find my Windows Updates in the same place and being deployed with the same constraints as other applications and packages being released for my machine.

When you add the WSUS role to your target server, you’ll want  to complete only the initial configuration window where you’re asked where to store the updates content. Don’t proceed with the next bit, which will have you choose classifications and such. All of this is to be done within the console. The last time I did a rebuild, with v1607, I found that I had to perform a manual synchronization with Microsoft Update once after adding the role.

Once that’s done, you can add the Software Update Point role to your site server in the console. In my last corporate environment, this process was repeated for the CAS and three primary sites. The primary sites were configured to synchronize with the CAS, so essentially, CAS communicated with Microsoft Update and notified downstream/child servers when it retrieved new items. The idea here is that your WSUS database is complete, and then you can narrow down product selection and update classification from the SCCM console.  This is done during the addition of the Software Update Point role.

It’s a good idea to enable the WSUS cleanup tasks (I have had to deal with the results of not doing this), as well as enable alerts on synchronization failures so that you can be sure that the SUP is successful in what should be a mostly-automated process when you’re done, with the help of automatic deployment rules.

You should get an understanding for the entire process from CAS Microsoft sync to client experience before you implement this in production. You’ll want to lay down your intended Sync schedules, Software Update Groups, ADRs, target collections, available/deadline preferences, and probably create staggered deployments to allow a “beta” group to receive updates prior to being dropped into full production.

Rebuilding the SCCMChris lab as time permits, I ran into an issue during installation of tech preview v1703 — the installer would hang during the database setup for many, many hours. It didn’t seem to completely stall, but after a day, installation was still chugging along. Thankfully, there’s a simple solution! For your guest machine, disable “Dynamic Memory” in Hyper-V manager, uninstall the site to reverse your failed installation, then kick it off again.

I think my non-DBA background got me on this one today. I renamed my Primary box this morning after doing my SQL 2016 installation last night. Tidied up issues in the Pre-req check for SCCM installation, so I kicked it off and came back to this: 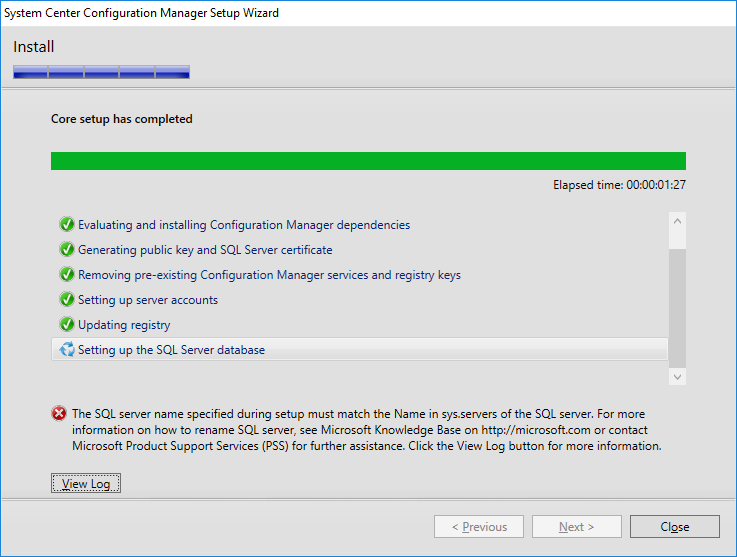 No doubt, this was due to my rename. It’s unfortunate that this isn’t checked a little sooner, as you’re left to do a site uninstall before you can rerun the installation properly. This is a great error, because it’s clear and even provides the solution.

Sort of. SP_DROPSERVER ‘MININTWHATEVERTHENAMEWAS” worked just fine, but apparently SP_ADDSERVER is no longer supported in SQL 2016 (maybe even earlier?). You’re instructed to use “linked servers” instead. In SSMS, I expanded “Server Objects”, then right clicked “Linked Servers”, and clicked “New Linked Server”. I entered CM-PRIMARY as Server Name and chose SQL Server as server type… and I’m greeted with a message stating you can’t create a local linked server. Switching back, I ran:
[code]"SP_ADDSERVER "CM-PRIMARY", local;[/code]
…and it executed without issue. I restarted the SQL service for good measure.

I confirmed the change worked by running the following, which returned my new system name, CM-PRIMARY:

I was then able to uninstall the site server and rerun the install again, this time successfully.