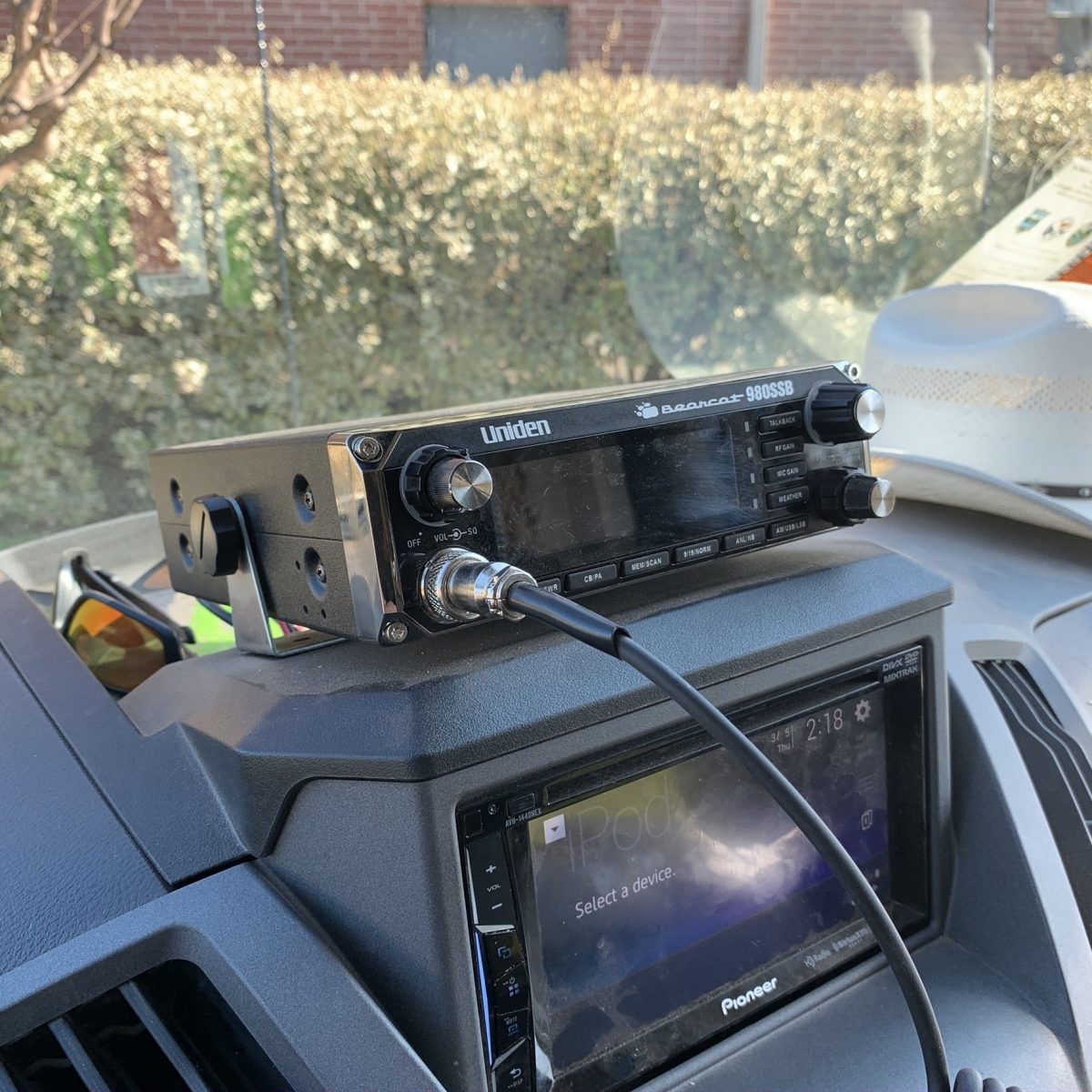 My friends and I are driving down a National Forest road with no cell service, being in a caravan makes it very tricky to explore any side roads together. I drive a mile up the road to scout it out and find a great spot at the end, and pass another car on the way back to my group. I tell the group about the spot, but by this point the car I’d passed had taken it. Alternate reality: I drove up the road, claimed the mountain-top spot with panoramic view of the Cascades, and radio’ed down to my buddies to come on up.

When traveling in groups, it provides an easy way to stay in touch without the distraction of using a phone (when that’s an option). My friend can alert me to road hazards, give me tips on lines to take up trails, coordinate recovery maneuvers, or point out that weird thing in the distance at a moment’s notice. In Enumclaw, WA, there is a coffee stand that takes orders on channel 11. I can get current weather reports outside of cell service, listen to trucker chatter, and the list goes on.

Please note: this is not a step-by-step tutorial, but I want to share the solution that I came up with to hopefully make it easier for the next person looking to enhance their van’s communication abilities!

Please don’t let any of the following information overwhelm you. In the end, other than a desire to communicate without requiring cell towers, expensive phones, monthly bills, or licenses, all you need to get started with CB is:

Here’s the equipment that I currently use and am very happy with. Cost is <$200.

This setup allows for use of sideband channels, which without getting too technical, allow you to transmit with 12 watts instead of 4 watts. My friend with the same radio, was able to pick me up in the Phoenix metro area 16 miles away. Of course, performance varies with terrain and elevation, but this setup has never let me down.

This is one of the most highly rated units I’ve found. Affordability, customizable colors, settings, sideband transmission, NOAA weather, and SWR meter make it my radio of choice.

This cable connects the radio to the antenna. When coiling excess, try not to make a loop, but rather zip the bundle tightly. Some of the alternative mounts I recommend below will include a cable.

I tried both the 5′ and 4′ FireStiks on mine and my buddy’s Transits, we got significantly better results with the 4′ I’ve listed above.

If you don’t have a brush guard or similar on your bumper and don’t want to drill, this hood lip-mount by Nagoya is probably your best bet.

This thing keeps the microphone suspended, out of the way, and the clip is just big enough to fit the passenger side visor bar.

Here are a few more photos of how it’s wired up. The radio itself only needs 12v, ground, and the antenna coax. It’s incredibly simple once you work out how you’re mounting everything. I wired it into one of my 12v accessory outlets, as it’s <3 amps. The Transits also leave these outlets active for 30 minutes once you lock the doors, so I don’t have to worry about running my battery down!

Other Antenna and Mount Options

My first CB setup had this 102″ whip antenna mounted on the passenger side brush guard, with zip ties to clip it back above the passenger door. This would regularly whack my van’s body. Moving it to the spot my Firestik is in now, I was picking up transmissions from Northern California! Beware: it’s huge and unwieldy, I wouldn’t recommend for permanent installation in this location.

I am lucky enough to have a steel tube brush guard to mount my antenna to. If I’m you, I don’t want to make new holes for my coax cable to pass into the cab and I’d prefer not to make any holes to mount the antenna. This brings me to my next suggestion…

The best choice I’ve come up with for this is the above Nagoya mount that attaches via set screws to the lip of your hood. This will give you flexibility to experiment with placement without making any permanent modifications to the van. Other options include..

VanCompass Hoodline Light Pod Mounts are $100 for a pair, require no drilling, and would be a feasible option for creating a clean antenna mount. I use these for LED pods, or I’d definitely have used them for a sweet dual-antenna setup.

Firestik SS174 Hood/Trunk Channel Mount is <$20 and requires some drilling into the fender, but would still allow you to make no new holes into the cab.

If you want something even simpler and more straightforward, perhaps just to experiment with, you may consider magnetic antennas like the one above. I have two things to warn you about with magnetic antennas. They’re a poor choice for range and they’re a poorer choice for any kind of forest roads and exploration. Magnetic antennas are going to get knocked over by every tree limb. However, if you are primarily interested in talking with friends and such on long trips, or just want to dip your toes in the water – this is a cheap and simple way to give it a try. Screw it into your radio and throw it on your roof.

My first CB radio was form over function.

My first experiment with CB in the Transit was with a handheld unit, the Uniden PRO401HH. The range on this unit was awful and I wouldn’t recommend it. I replaced it with the Uniden CMX760 Bearcat. The main appeal for me was that the unit was so small that I was able to install it underneath the center cupholders, so all that was visible was the handset (which housed the control buttons and a screen).

Unfortunately, as the reviews indicate is common, the unit would lock up and shut off at random. I had the same issue with a Uniden handheld, before I discovered that the general consensus is that handheld CBs are all trash in this budget range. I felt it important to mention these two units, as you’ll likely see them in your research. They’re simply not worth your time or money.

I hope there was some useful information here for you, diving into the technical side of CB (and radio in general) is beyond my experience. I’d like to thank Darin @darin.arrick and Tony @verdiethevan for their expert guidance in my understanding of radio hardware and theory.