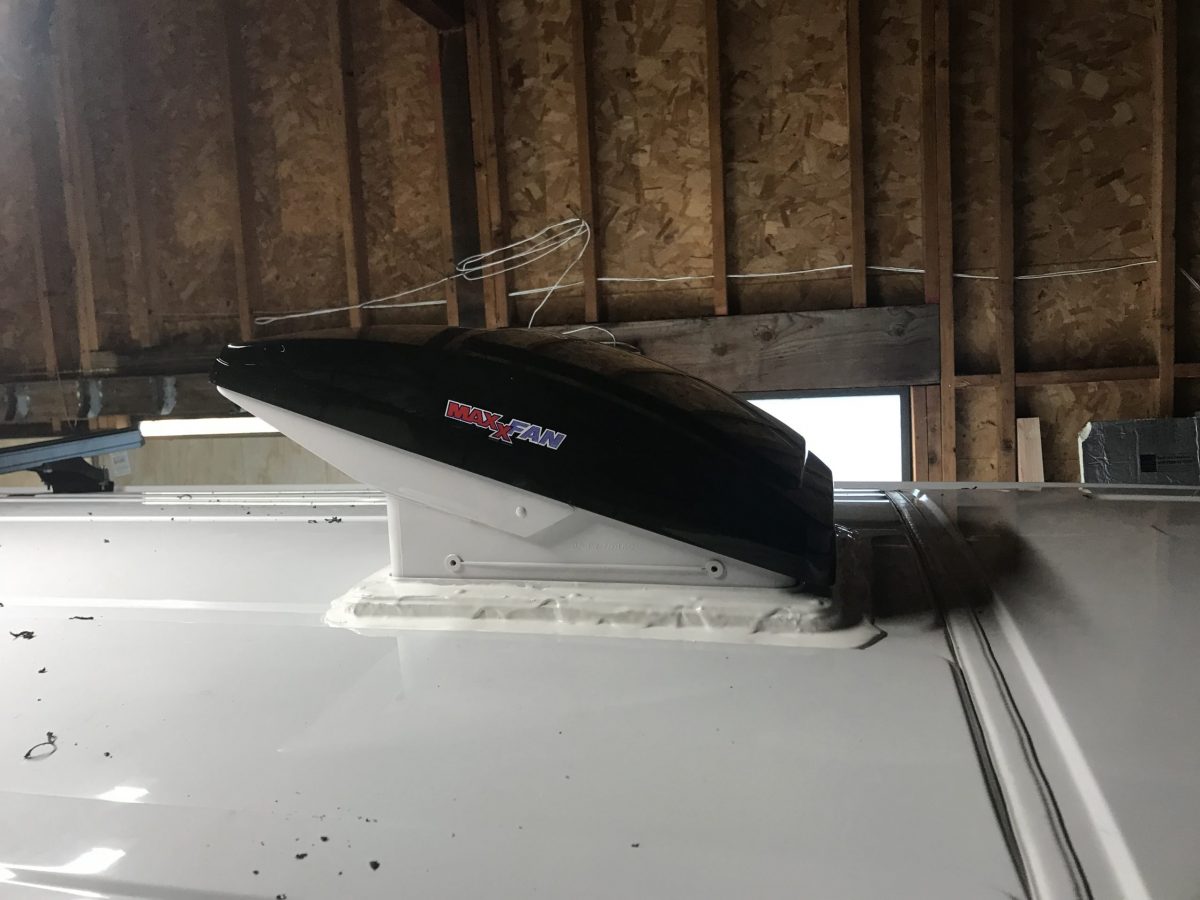 One of my primary objectives when I first bought my Transit was not to make any unnecessary holes. This was one hole there was no avoiding. I chose the MaxxAir Deluxe 7500K – you can run it while it’s raining, it has an automatic 78 degree setpoint, and has electric opening, and comes with a remote control (mine stopped working quickly, see below). All things considered, I still think this (or the 6200k) is the best option for any van. This is something that you can install very early in your build, as the interior trim piece doesn’t have to be installed until you’re ready.

Full disclosure: my unit stopped responding to remote commands within a few months and MaxxAir support was completely nonresponsive for 6 months. When they finally replied, they suggested that having an (IPHONE) in the van would cause the remote to fail. Absolute nonsense! The remote communicates with infrared like standard TV remotes. My friend’s remote also didn’t work in my van, but my remote works fine in his. Speaking of infrared: unless there’s line of sight to the sensor, it won’t work — and the sensor is usually recessed from the finished ceiling. The only reason to buy the 7500k over the 6200k is for the electric opening feature, in my opinion.

I include Amazon affiliate links in many of my articles, using these links does not affect the price you pay, but does allow me to make a small commission from Amazon. I appreciate your support.

The install process for this is simple, but a little tedious. I do not know how you would install this fan without the Impact Products roof adapter — the Transit roof is curved. This adapter is 3d printed, but highly sturdy and a quality product. I recommend sticking with the current instructions included with that adapter, but I’ll outline what I did.

I installed this fan over a year ago and have driven 40,000+ miles with it installed with no issues. My fan is placed about 2″ too far forward to add my 4th Rhino Rack crossbar. The MaxxAir can operate like an intake fan – and it would be incredible to have that airflow over you in bed during the summer months. That said, I highly recommend installing the fan toward the rear of a LWB Transit.

I chose not to use interior furring strips, instead opting for stainless steel hardware and washers. With 16 fasteners, I was not concerned with the fan ripping out. I have driven to 97mph and have never had any issues with my fan other than the remote issue I described earlier. Still, I would choose this fan again tomorrow without hesitation.

The fan noise was pretty loud at first, but I realized that having a window open somewhere was crucial. I had a sliding window installed in my slider door – the fan is incredibly efficient now, much quieter, and you can really feel the air flowing. Power usage is minimal at lower settings, and the auto-78 mode is great for periods where I’m away from my van and don’t want it to become an oven.